skip to main | skip to sidebar

SEX: What's Right? What's Wrong? And Why? Join the Discussion!

What Was The Sin Of Adam And Eve?
Why Is It Relevant To Us Today?
Although everyone is familiar with the story of Adam and Eve, this narrative has been interpreted and re-interpreted countless times and numerous ways throughout Judea-Christian history. Precisely what mankind's first sin was and how it subsequently effected the human condition continues to be a source of debate.

What is the meaning of the Eden account? And what relevance does it have for today?

According to the biblical account, our first parents lived in an idyllic setting, the paradisaical Garden of Eden. God told them they could freely eat of all the fruit from all the trees in the garden. However, there was just one exception: the fruit from The Tree of the Knowledge of Good and Evil was off-limits.

Subsequently, a sly serpent questions God's motives and beguiles Eve to go ahead and eat.

Eve just can't resist the luscious fruit. She takes a bite. Yummy! Then she persuades Adam to do likewise. Suddenly, out of the blue, something unusual happens; they discover their nakedness and they don't like what they see.

So before sin enters the world, they are naked, feeling no shame whatsoever (2:25). Then, moments later - voilà! - their eyes are opened wide... though probably not in the way they had anticipated. Now they feel a profound sense of bodily shame. Their newly-acquired inhibitions prompt them to take fig leaves and manufacture aprons, thereby covering their nakedness (3:7).

Toward evening, they hear the Lord God walking about in the garden, so they hide themselves among the trees.

First, Adam blames Eve (3:12). Then Eve blames the serpent (3:13). God pronounces judgement on all three of them, beginning with the serpent:

So the Lord God said to the serpent, "Because you have done this, you will be punished. You are singled out from all the domestic and wild animals of the whole earth to be cursed. You will grovel in the dust as long as you live, crawling along on your belly. From now on, you and the woman will be enemies, and your offspring and her offspring will be enemies. He will crush your head, and you will strike his heel" (3:14-15, NLT).

Next, God pronounces judgement on the woman:

Then he said to the woman, "You will bear children with intense pain and suffering. And though your desire will be for your husband, he will be your master" (3:16, NLT).

And to Adam he said, "Because you listened to your wife and ate the fruit I told you not to eat, I have placed a curse on the ground. All your life you will struggle to scratch a living from it. It will grow thorns and thistles for you, though you will eat of its grains. All your life you will sweat to produce food, until your dying day. Then you will return to the ground from which you came. For you were made from dust, and to the dust you will return" (3:17-19, NLT).

Next, Adam names his wife Eve.

And Adam called his wife's name Eve, because she was the mother of all living (3:20, KJV).

Etymologically, "Eve," from the Hebrew word "hawwah," means "to live." The Septuagint rendering in this passage is "Zoe," which means "life," or "life-giver." In two other passages, Genesis 4:1, 25, her name is transliterated "Eua." Notice that it wasn't until after being booted from Eden that Adam named his wife "Eve," which means "The Mother of All Living." This begs several questions:

1. Would Eve have become "The Mother of All Living" if she had not sinned?
The word "woman" means "man with a womb." Mother goddesses were worshiped throughout history because of their ability to procreate. Some interpreters believe that Adam and Eve acquired the ability to procreate as a result of sinning with the serpent, an ancient symbol of fertility.

2. Is it just a coincidence that Asherah, a prominent fertility goddess among the neighboring Canaanite fertility cults, also held the title "The Mother of All Living?"

3. Is it just a coincidence that Asherah, like Eve, was often depicted nude with a serpent?

4. Is it just a coincidence that the serpent was, among other things, a prominent phallic symbol, worshipped as a god of fertility among these same neighboring fertility cults, not to mention many if not most primitive religions?

Is Clothing A Result Of The Fall?

Did The Serpent "Really" Lie?

In What Sense Did Adam And Eve Die?

I. What Was The Forbidden Fruit?

II. Was The Forbidden Fruit Literal, Symbolic, Or Both?

III. Were The Following Elements Of The Eden Story Literal, Symbolic, Or Both?

(a) The Talking Serpent

(b) The Tree Of The Knowledge Of Good And Evil

(c) The Tree Of Life

IV. How Did The Sin Of Adam And Eve Effect Humanity?

I. What Was The Forbidden Fruit And Why Was It Forbidden?

Four Ways Adam And Eve May Have Misused Sex

Why Has The Sexual Interpretation Gone Out Of Vogue?

What Did The Eden Narrative Mean To Ancient Israel?

Eve And Asherah: What's The Connection?

Tree Worship: What's Sex Got To Do With It?

2. Figs as Aphrodisiacs and Phallic Symbols

3. The Garden Was A Metaphor For Both The Female Body And The Female Sex Organ

4. An Enclosed Garden Was An Idyllic Environment For Lovemaking

5. The Serpent Was a Phallic Symbol

6. The Apple Has Long Been A Sexual Symbol

7. The Serpent Was A Universal Fertility Symbol

8. Eve And Asherah Shared The Title: "The Mother Of All Living"

10. Adam And Eve Were Ashamed Of Their Nakedness After They Sinned

How Could Eve Have Sex With A Serpent?

II. Was The Forbidden Fruit Literal, Symbolic, Or Both?

Can Eating A Piece Of Literal Fruit Contaminate The Human Race?

(b) Was The Tree Of The Knowledge Of Good And Evil Literal, Symbolic, Or Both?

How Did Adam Partake Of The Forbidden Fruit?

Are There Female Demons?

(c) Was The Tree Of Life Literal, Symbolic, Or Both?

IV. How Did The Sin Of Adam And Eve Effect Humanity?

Was The Forbidden Fruit Only A Test?

What Did It Mean To Freely Eat Any Fruit In The Garden?

Concluding Remarks
So far, I've given many logical reasons why the sin of Adam and Eve was a sexual transgression of some sort or another. But exactly what did happen in Eden? And why is it important to us today?

Some consider these musings a waste of time, akin to speculating on how many angels are on the head of a pin. Although I consider the inquiry into the nature of Adam and Eve's transgression both fascinating and important, for my purposes, the really important questions are:

1. How would sex have been different if Paradise had not been lost?

2. What will sex be like when Paradise is fully restored (i.e. The New Heaven and the New Earth)?

I believe that the answer to the first question will give us the answer to the second question. In his excellent book entitled Heaven, Randy Alcorn makes the point that Paradise restored will be like Paradise lost in almost every single way, but with one exception: there will be no sex in Heaven. Although I'm a big fan of Alcorn, I disagree with him on this point.

Whether the full restoration of Paradise will be delayed until The New Heaven and the New Earth or whether that fully restored Paradise is now being enjoyed in Heaven now is certainly open for debate.

Once we answer these overriding big questions, then what? Should we procrastinate and simply twiddle our thumbs, waiting patiently for "The Sweet By and By" in the sky? Or should we take immediate action to restore sexual paradise on earth, starting right now?

Jesus said, "Your will be done, on earth as it is in Heaven."

Some suggest that the ideas I'm promoting are dangerous. Martin Luther said:"Peace if possible, truth at all costs." The pertinent question before us now is: Are my ideas true? If so, then damn the torpedoes. Let's stand with Martin Luther and defend the truth, both in our words and in our deeds. Let's stop twiddling our thumbs.

All comments are welcomed and appreciated, as long as those comments are thoughtful, constructive, and reflect a Christian perspective. Please, no profanity. Be respectful of others. Also, be sure to stay on topic. The comment button is located below on right.

The Temptation and Fall of Adam and Eve by Michelangelo 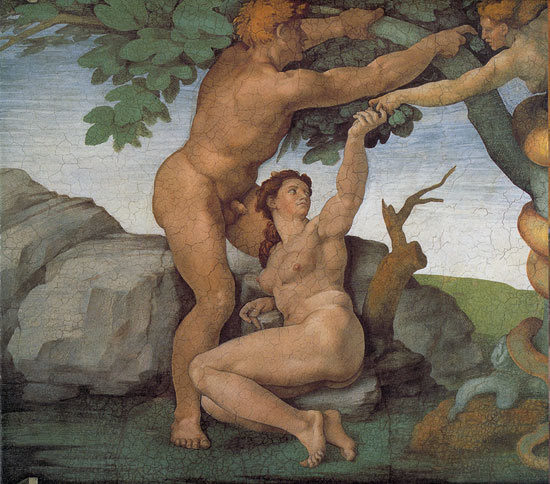 Fresco from the Sistine Chapel

PLEASE TAKE OUR SURVEY.
We Value Your Opinion!

Which of the following do you think best describes the sin of Adam and Eve?

Tom Gruber
In 2001, I published a book through Trafford Publishing entitled: What the Bible "REALLY" says about... SEX: A New Look at Sexual Ethics from a Biblical Perspective. Here are a few of the key points: (1) Marriage, as we know it, was instituted after the fall as a result of the fall. (2) There are two kinds of sex: Responsible Sex and Irresponsible Sex. Sex outside of Marriage can be and usually is irresponsible, but not necessarily. (3) Alternative lifestyles, such as swinging and polyamory, can be practiced responsibly and therefore, they are not sinful per se. (3) There is sex in Heaven. In fact, there is polyamorous sex in Heaven. These ideas have been met with great resistance in the Christian community. I still believe much, if not most, of what I believed back in 2001. But I am constantly refining my beliefs and subjecting them to rigid scrutiny. Ultimately, I believe the Bible is the final court of arbitration for all Christians. ChristiansTalkingAboutSex.com is a Christian site dedicated to seeking the truth regarding sexual ethics.